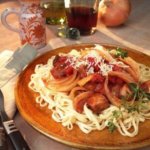 One of my favorite onion quotes is rooted in American history.  It goes like this.  In 1864, General Ulysses S. Grant declared in an advisory to the federal government, "I will not move my army without onions!" Likewise, General Robert E. Lee complained the Confederate congress was unable “to do … END_OF_DOCUMENT_TOKEN_TO_BE_REPLACED

Okay, I admit that chocolate is usually paired with fruit so when you talk about onions and chocolate together, it might seem unusual.  But seriously, you really should try Caramelized Secret Chocolate Cake with caramelized onions.  The first time I tried it I couldn't believe how moist and … END_OF_DOCUMENT_TOKEN_TO_BE_REPLACED 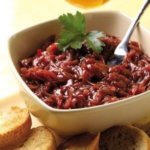 In honor of the smash-off this weekend between the Pittsburg Steelers and the Green Bay Packers, I thought "Hey, what could be more appropriate for a Super Bowl party than some really hip salsa and dip!?"  Since, I didn't have a better come back answer, here are a few of my favs to make your party … END_OF_DOCUMENT_TOKEN_TO_BE_REPLACED