The Allium leafminer is here, and it could potentially spread across the United States — by our own shipping processes. Such an eventual spread could hamper domestic and international onion trade.

WHAT IS THE ALLIUM LEAFMINER? 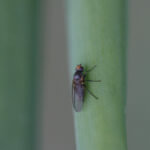 This is a little fly whose offspring feed inside Allium plants, ruining those precious vegetables for the market. The females lay their eggs in Allium leaves, then larvae feed in the leaves and eventually pupate inside the vegetable, typically at the base of the plant including the bulb. Leeks, scallions, garlic and transplanted onions are a little more vulnerable than most.

At the 2019 International Allium Conference, Dr. Brian Nault of Cornell University charted a potential path for the pest to spread throughout the country. Download his presentation here.

“I don’t think that Allium leafminer is likely to move west on its own. It’s not a good flyer, so it’s not going to be taken by the winds. Its march across the U.S. would be a very slow one if it is up to itself. My guess is that it will have a better chance to move with human’s help. For example, our garlic growers in New York share garlic all the time. There could be other routes of spread, and all cases with human assistance.” 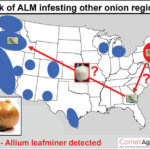 Here’s how that COULD look if it is not contained.

If the Allium leafminer made its way to Georgia, assuming it could live heartily in Georgia’s hotter environment, the bug could conceivably spread throughout the country through the very popular Vidalia onion bulbs that America loves and craves.

“What’s at stake for the onion industry?” Nault said. “There are a number of ifs, anywhere along that route could be derailed. If you’re conservative, this could potentially be a route to get this pest quickly to the Pacific Northwest, and it could jeopardize international markets. A lot of onions from Oregon end up in California. California has a quarantine, so Oregon onions couldn’t go to California.”

That’s about 40 million fewer potential onion consumers.To date, California is the only state that has an active quarantine, which means federal ag inspectors are actively looking for the leafminer on any shipments bound for California. That means that if the leafminer gets in the Pacific Northwest or the Midwest and you normally rely on California as one of your onion markets, that market has suddenly gone away.

The way to avoid that potential future would be for your state Department of Agriculture to apply for quarantine status. Oregon has one pending, and Georgia also is working on a plan of their own. The more states that get quarantine status means the more eyes watching for the bug’s entrance into fragile markets. Having a quarantine would ensure your continued trade with the likes of California and its 40 million consumers.

Nault and his colleagues from Penn State University are actively working on identifying effective insecticides that will control the tiny pests, and they are making excellent headway. But their field research trials are confined to New York and Pennsylvania. There are still many “what-ifs” when it comes to how far this pest will spread and the economic damage it may cause.

The NOA will end assistance in helping get state ag departments to apply for quarantines.  Here is a link to learn more.