You are here: Home / All About Onions / Trivia

Looking for Trivia & Other Fun Stuff? Here is some interesting trivia all about onions. 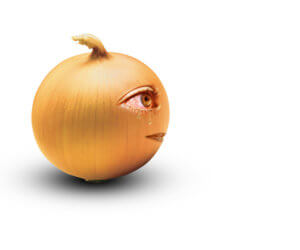 What compound in onions brings tears to your eyes?

Sulfuric compounds. To cut down on the crying, chill the onion and cut into the root end of the onion last.

How many pounds of fresh and storage type onions does the average American eat per year?
20 pounds.

How many truckloads of onions are consumed each day?
Over 450 semi-truck loads.

What country boasts the highest per capita consumption of onions?
Libya, with 66.8 pounds of onions consumed per person each year.

A single serving of onion contains how many calories?
45 calories.

What are the three colors of onions sold in most grocery stores?
Yellow, red, and white. 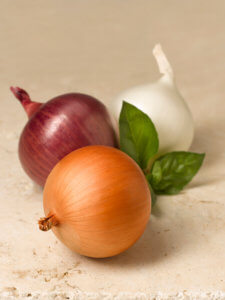 How many acres of onions are planted in the United States each year?
On average, 125,000 acres (excluding onions for dehydration processing).

What cocktail is traditionally garnished with a pearl onion?
The Gibson. According to Webtender (online bartender), the Gent of the Jury, Patton Martini, Pan Galactic Gargle Blaster #2, and the Yellow Rattler also call for a cocktail onion.

According to an old English Rhyme, the thickness of an onion skin can help predict what?
The severity of the winter. Thin skins mean a mild winter is coming while thick skins indicate a rough winter ahead.

According to the Guinness Book of World Records, how much did the largest onion ever grown weigh?
18 pounds, 11.84 ounces pounds. It was grown by Tony Glover, United Kingdom. Set on Sept. 12, 2014.

What should you eat to get rid of onion breath?
Parsley.

In which animated movie does the main character compare himself to an onion?
Shrek the ogre in the movie series Shrek states, “Ogres are like onions, they’re made of many layers.”

New York City is known as the Big Apple. Before having that nickname, it was known by a different nickname. What was it?
According to the book *1,000 Places To See Before You Die by Patricia Schultz, New York City was called the Big Onion because it was a place from which you could peel off layer after layer without ever reaching the core.*

What Beatles song has “onion” in the title?
Glass Onion. (The White Album)

In what famous story was the Seven-of-Spades threatened to be beheaded for bringing the cook tulip-roots instead of onions?
Alice’s Adventures in Wonderland by Lewis Carroll.*

“We remember the fish we ate in Egypt for nothing, the cucumbers, the melons, the leeks, the onions and the garlic; but now our strength is dried up, and there is nothing at all but this manna to look at.”
-Numbers (11:5-6)

“I crawled into the vegetable bin, settled on a giant onion and ate it, skin and all. It must have marked me for life for I have never ceased to love the hearty flavor of onions.”
-James Beard, American cooking expert and author

“I will not move my army without onions!”
-Ulysses S. Grant

“The onion and its satin wrappings is among the most beautiful of vegetables and is the only one that represents the essence of things. It can be said to have a soul.”
-My Summer in a Garden by Charles Dudley Warner

“If you hear an onion ring, answer it.”
-Anonymous

“Life is like an onion. You peel it off one layer at a time; And sometimes you weep.”
-Carl Sandburg, American poet

“Onions can make even heirs and widows weep.”
-Benjamin Franklin

“Life is like an onion; you peel off layer after layer and then you find there is nothing in it.”
-James Gibbons Huneker, American musician, critic

“For this is every cook’s opinion, No savoury dish without an onion; But lest your kissing should be spoiled, Your onions should be thoroughly boiled.”
-Jonathon Swift, Irish satirist

“Take care to chop the onion fine.”
-Opening line of Like Water for Chocolate by Laura Esquivel

“Why is it that the poet tells So little of the sense of smell? These are the odors I love well: The smell of coffee freshly ground; Or rich plum pudding, holly crowned; Or onions fried and deeply browned.”
-Christopher Morley, poet

“It was for bringing the cook tulip-roots instead of onions.”
-The reason the Queen of Hearts wants to behead the Seven-of-Spades in Alice’s Adventures in Wonderland by Lewis Carroll

“Mine eyes smell onions: I shall weep anon.”
-All’s Well that Ends Well by William Shakespeare

“The onion tribe is prophylactic and highly invigorating, and even more necessary to cookery than parsley itself.”
-George Ellwanger, British food writer

“Banish (the onion) from the kitchen and the pleasure flies with it. Its presence lends color and enchantment to the most modest dish; its absence reduces the rarest delicacy to hopeless insipidity, and dinner to despair.”
-Elizabeth Robbins Pennell, American columnist