Onions are incredibly sustainable. It’s hard to believe any onion would go to waste outside of the kitchen, but they do have uses that can be beneficial as a natural dyeing agent, helping reduce feed costs for sheep and they can even be used to power an entire manufacturing plant. We call it onion power. 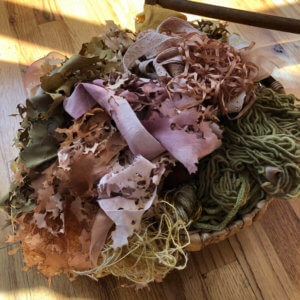 The National Onion Association has been working in partnership with Fragmentario studio in Brooklyn, N.Y., and the New York Parson’s School of Design on a project entitled, “Onion Society.” This was a master’s project for four Parson’s students to naturally dye fabrics with onion skins. Dyeing fabrics naturally has not yet become a part of “fast fashion,” but its day is coming. The students proved that you can make beautiful colors with wools, linens, and silks. Onion skins can be used as natural fabric and textile dyes to add yellows, pinks and greens without the harsh chemicals. 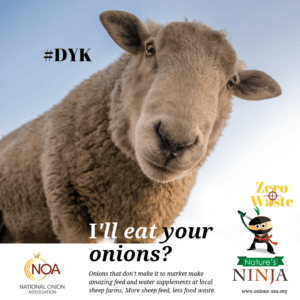 Onions, like all produce, is graded. The higher grades (of size and look) make it into our supermarkets for consumers; lower grades (which are smaller and perhaps bruised) go to processing companies. But there also are onions that don’t make either grade and they are often sowed back into the soil. Many growers, however, are savvy on agricultural practices, and have found that feeding sheep onions not only helps reduce ranchers’ feed costs but water costs as well.  That means zero waste. Find more information at the USDA Online Magazine. Another great study can be found at Colorado State University Extension 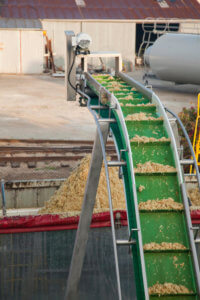 Leftover onion parts are being used in California to power the entire plant from which they’re processed, saving thousands in electrical costs. The Gills Onions Advanced Energy Recovery System has in its 10 years created enough onion power to fuel 460 homes.

NOA member Gills Onions is an onion processor, selling sliced and diced onions mainly to the restaurant market. The plant can process up to 1 million pounds of raw onions in a day, creating an average of 300,000 pounds of onion waste (peels, stems and tops) each day. In the past, Gills Onions trucked this waste to farms where it was worked into the soil as a method of disposal. But this practice proved problematic for soil conditions, as well as expensive, with a $400,000 annual expense to move the waste. 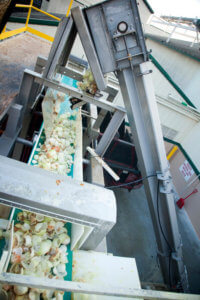 This accounts for nearly 60% of the plant’s total energy requirement, and, alternately, would provide enough power to supply 460 residential homes for an entire year.

Since its commissioning in 2009, this award-winning system has generated over 25 gigawatt hours of electricity.

The AERS has also reduced the amount of disposed organic waste to essentially zero, while eliminating up to 14,500 tons of carbon dioxide equivalent emissions per year.