You are here: Home / General / Onions to Move an Army

One of my favorite onion quotes is rooted in American history.  It goes like this.  In 1864, General Ulysses S. Grant declared in an advisory to the federal government, “I will not move my army without onions!”

Likewise, General Robert E. Lee complained the Confederate congress was unable “to do anything except eat peanuts and chew tobacco, while my army is starving….”

Fortunately for Grant and the troops, his demand was met.  Immediately, Grant was sent three traincar-loads of the flavorful bulbs which were appreciated by soldiers for both their flavor and antiseptic properties when used to treat powder burns.

When I learned about this interesting fact, it broght to light just how difficult it was to get food to the military camps.   Food perservation was in it’s infancy.

It was Napoleon who first stated that an army marches on its stomach, an idea that has been repeated frequently during times of war as recently as Desert Storm.  In fact, Napoleon was so firm in his belief he offered a heafty prize to anyone who discovered a way to get better food to the French army.  Nicholas Appert, a confectioner, won the prize  in 1795 by discovering the process of hermetically sealing food. In 1810 a patent was taken out in England for Appert’s method, and soon the idea spread to America, where lobster and salmon were the first foods canned.

In 1823 an American, Thomas Kensett, invented the tin can. By the late 1860’s many foods were being canned.  In fact, during the civil war the Northern army used this to their military advantage.  Unfortunately, The South experienced major food shortages and the Civil War marched on slowly.  Source: www.foodhistory.com

When your army of hungry folks come marching in the door, here’s a great recipe to fill them up, even on a budget! 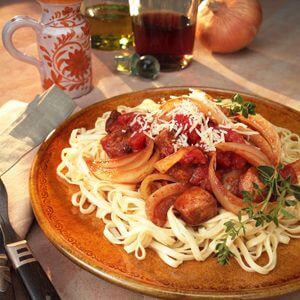 Directions:  Trim fat from the chops or blade steaks.  Trim the meat from bones, and cut into small cubes.  Dust pork with oregano and cumin.  Heat oil in large skillet over medium-high heat.  Add onions and pork and sauté until cooked through, about 7 to 8 minutes.  Add tomatoes and heat.  Cook linguine in boiling water about 2 minutes or as package directs.  Drain and serve with pork-onion sauce on top. Sprinkle with cheese and herbs.  Makes 4 servings.