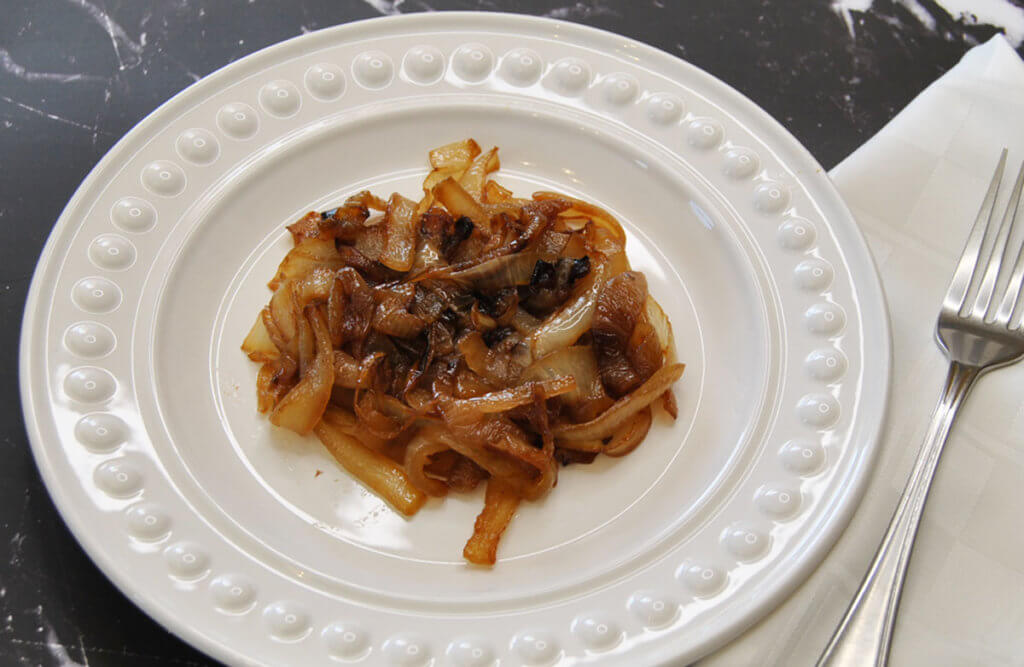 Nothing beats the sweet flavor of caramelized onions, but the reward is not without a little effort. Truly caramelized onions that are dark brown and soft with a flavor as sweet as candy take around 45 minutes to make — sometimes longer. They also need to be watched closely.

Since not everyone has that kind of time, when we heard about a short-cut, we decided we had to try it. Apparently, the trick to getting onions to caramelize more quickly is to add baking soda.

The idea left us both curious and a little skeptical. Caramelized onions are a specialty around here, and we are always willing to put in the extra time for all that deliciousness. But who are we to deny others from saving time in the kitchen?

Are you curious about this time-saving trick, too? Read on to find out how it went in our test kitchen.

First, it’s important to understand what is happening during the caramelization process and how baking soda is influencing it. As onions cook, they release their moisture and cells begin to break down, causing them to soften. Sugars are released and as they heat up, both caramelization and a common chemical reaction in food occurs, called a Maillard reaction or Maillard browning. Both of these create the dark golden brown color we associate with caramelized onions.

When you add baking soda during cooking it changes the pH which increases the Maillard reaction causing the onions to brown more quickly. The higher pH also causes the onions to soften more quickly, which we cover below when we discuss the texture. 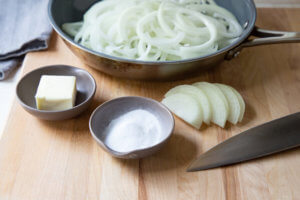 How we tested the trick

It’s important not to use too much baking soda as it can change the flavor of the onions and give them an unappealing chemical-like taste. Most recipes call for a pinch, but a pinch is up for interpretation so we wanted to define it. We also read to limit the amount to ¼ teaspoon per pound of onions. In the end, we decided to err on the side of caution and added an ⅛ of a teaspoon to 1 pound of yellow onions with the recipe below.

We added both the onions and the butter to the pan at the same time and turned the burner to medium heat. We started our timer at this point and continued to stir until the butter melted, then stirred the onions often as they caramelized.

Our onions were soft and caramelized in about 13 minutes. Not too far off from suggestions we found around the Internet that it would take 10 minutes, and a lot less than the typical 45 minutes when not using baking soda. That being said, there were pros and cons to this quicker method.

Below are images of the onions as they cooked. Working clockwise, it starts with the onions just a couple minutes after the butter had completely melted. Then at about six minutes, followed by eight minutes, and finally at 10 minutes. 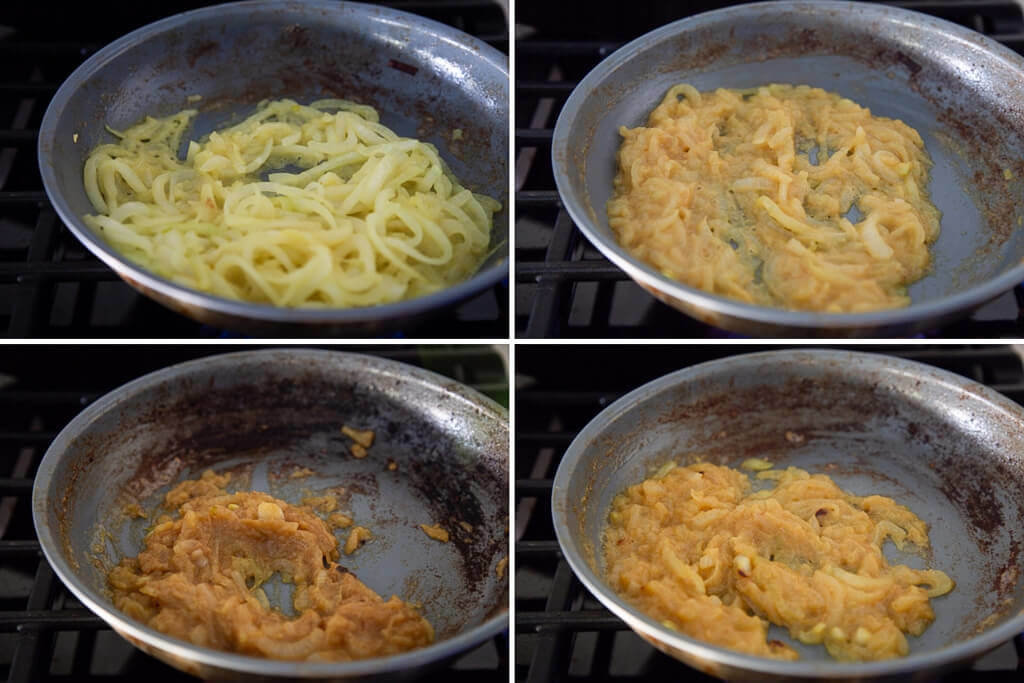 The onions took on a yellow hue almost immediately after cooking and maintained a bit of an orange color throughout the process. At 10 minutes, they finally started to show signs of turning brown versus orange and at that point we continued to 13 minutes to obtain the darker golden brown color you see in the final images.

No chemical taste with these onions. They were delicious. Maybe even a little sweeter than using the longer method.

The onions dissolved a bit more and became creamy, almost like an onion jam. This was expected with the higher pH and it can be good or bad, depending on how you plan to use the onions.

For blending the onions into dips or spreading onto a sandwich, the caramelizing with baking soda provides the perfect end result. The soft texture allows them to blend right in with other ingredients and they are nearly spreadable.

If you are hoping for visual appeal and a bit of bite to the onions, the quick caramelized method probably isn’t the way to go. For example, if you want to put them on a pizza or pile them on a bite-size appetizer.

Something else to note

The onions did make a bigger mess in the pan. The sides became very dark as the onions cooked. We highly recommend using a non-stick pan to make clean-up a bit easier.

Will we use the quick method again?

Yes! Especially when we are in a hurry to put together a recipe with caramelized onions that calls for blending the onions into a dish with other ingredients. We’ll stick with the longer, traditional method for our caramelized onion for pizzas and other topping purposes, though.

Check out our delicious onion recipes.