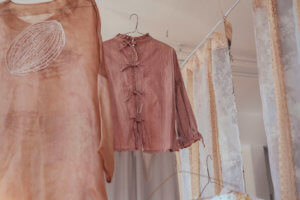 Aug. 31, 2019 — (NEW YORK) Four fashion students have harnessed the power of the onion using the vegetable’s skins to naturally dye fabrics and textiles, and they will display their work during New York Textile Month in September.

Their work, a part of their graduate studies program at the New York Parson’s School of Design, encapsulated a growing movement on sustainability, with one common denominator — onion skins. The students dyed wools, yarns, cottons, linens and silks naturally with onion skins and other natural ingredients to enhance color. Their work, officially called Onion Society, will be displayed Sept. 20-22 along with onion dishes and even an onion video, at the Issue 00, 41 Varick Ave, Unit 301, Brooklyn, New York.

The project, sponsored in part by the National Onion Association, came about from New York fashion designer Maria Elena Pombo, who is known for her natural dyes with avocado seeds. Pombo, a Parsons graduate herself, opened her Brooklyn studio, Fragmentario, for these students during their master’s education in a practicum environment in which they work on real-world projects. Pombo opted for the students to work with onion skins after realizing they all came from the top-10 onion producing countries in the world: USA, India, China and Japan. They each used the onions to create unique textile work and explore the roles of onions in their cultures.

There’s an entire movement for sustainable textiles, demanding ethically produced clothing, but also environmentally-friendly fabrics and dyes. While modern-day fashion continues to be more geared toward “fast fashion,” on a smaller scale, a trend of natural dyes can only grow. “We’re all converts for life,” said student Tess Murdoch, noting that onion skin dying has replaced their love for the industry standard synthetic dyes.

Using onion skins as natural dyeing agents demonstrates the sustainability of one of the world’s oldest and most beloved vegetables. In an age when food waste has become a paramount global problem, the onion’s continued usefulness demonstrates true onion power. The onion is a key feature in daily diets and is the third-most consumed fresh vegetable in the United States. Naturally, that can create a lot of waste. 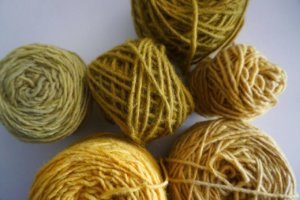 “I go very often to Italy, and there, they burn the onion skins,” Pombo said. “Here (In the United States) they just throw them away. I don’t know which is worse, burning them or just throwing them away.”

The onion dyeing process is all natural, and dates back to 2600 B.C. Sometimes they’ll use baking soda to change the ph of the water, which changes the color; sometimes they’ll use vinegar. But the biproduct is always natural — enough to go back into the earth for zero waste.

“Here in New York, they are dumped in piles in the fields nearby and literally blow away or eventually break down,” Pawelski said. “Having a use for them is great!”

This project is one of the many ways onions demonstrate zero waste. Many members of the National Onion Association are involved in myriad ways to reduce their collective footprints across the country. From installing solar farms and finding natural ways to heat, cool and light buildings, to sustainable water and land management — even generating electricity from discarded onions — National Onion Association members continue to work toward a better Earth to leave to the next generation.

The National Onion Association is a nonprofit trade organization dedicated to supporting America’s onion farmers and increasing the consumption of onions. Its members are dedicated to doing what’s right by the land they farm and the environment.